The following is a an extract from a school journal I did a few months back before heading for stage and that would be the ideal place to start this article. The first article was about this imaginary person called Dom who sort of lived the exact same life I did and did the exact same thing but told in a third party perspective.

“………… Well, it’s been 6 months… and he… Let’s call him Dominique for now. Dominique was excited to begin his trip to the South of the France where he didn’t really and never heard of really before two months ago when he asked for the school. He arrived during the winter, when the flowers had all died down and the atmosphere around Agde was dark.

Gastronomicom was where he chose to study and from his first day at school he did test for a language that he knew nothing of even how to say hello properly. The test was simply a way to tell him that he needed the belt up and learn the language fast.

The first few weeks were difficult for the language especially the part do not know the French to communicate when asked directions… but being a social person he soon made friends by slowly learning the school life and daily routine started to be much simpler for him. Baking classes is what he started with in its three first months… in (pastry) it was presented with so many techniques and ingredients that he had not seen or heard of before that was exactly what he came for what he could not be happier.

Yes, Dom is his nickname, but Dom had heard today, only for him to get a good placement for his internship he had to be exceptional in almost all areas is the French, pastry and cooking. As a worker Dom was already in the kitchen, but he has had to work even harder for this to get the Michelin and the crème de la crème of restaurants.

5 months later Dom had his place of internship and he did not wish a better place all his life he had seen videos of a day’s work in a Michelin restaurant in France.The night he heard the news he took a bottle of wine went to sit outside and opened it and poured himself a drink and looked up at the sky and whispered these words.’’Thank you… ‘’Dom said. He began to enjoy his wine and that meant that the real work is to begin in a month or two. Dom was already a chef in a 5 star restaurant so working long hours was not a new thing for him.

As I write about my friend Dom, which is one of my close friends is preparing to go to an internship in the region of Provence in the South of the France. A little nervous, but more than ready, they say that good things come to those who wait so I’ll sit back and support Dom as he goes for his Michelin, which has always been his dream, and the dream became reality when we wake up and really do something.

I need to cut this short autobiography about Dom and his life at Gastronomicom but I’d like to talk to you when he gave a speech in French and broken English and he was very happy in his topic or even the friends who are d income more family to him and was surprised when it snowed Yes snowed in the South it was something he had rarely experienced. I will conclude here because I don’t think he would want me to talk about him for this long but Gastronnomicom has been an experience of a lifetime for me and Dom. …..’’

Pretty long I know but in that extract you can feel my excitement as I prepared to embark on this journey to the unknown really. A lot has changed since I last wrote the article. Personally I’ve grown as a person and a chef…i took a few looses last year but bounced back stronger than ever but I wll focus mainly on my internship.
Tucked in the mountain region of Provence is a nice small family owned Michelin star restaurant run by the owner and the chef Jany Gleize who is this legendary and well know chef in the region for his bold and natural tastes he always serves up and his charming attitude helps too as he was like a father to everyone really working in the restaurant.

The first few days I didn’t do nothing much jus the usual simple kitchen tasks as I was still getting to know how everything works in that kitchen but as months passed by more and more responsibilities were bestowed on me and to cap it all off on the 25th and 31st I was tasked with the duty of coming up with the main dish of the 7 course dinners we served.
I was quite nervous about this but with my application of the things we learned in school and my research I and the team had a beautiful dinner service as the food was also amazing.

Language….of course I had to touch on this…bare in mind I hadn’t spoken a single French phrase before I started school and with daily French classes in school and constant examination I slowly started to get the logic first then the application came later and then working with only French people made it much better because that’s all they get to speak so you adapt or you get left out of conversations. Needless to say one year later in France and best believe I’m writing bilingual on my resume.

To conclude this long biography it wouldn’t be right of me to finish this off without saying my thank you because without the school and hotel I was in I really don’t think I would have grown as chef this fast and this effectively. So I say a big thank you to anyone who made this possible. Merci beaucoup. 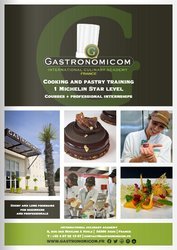